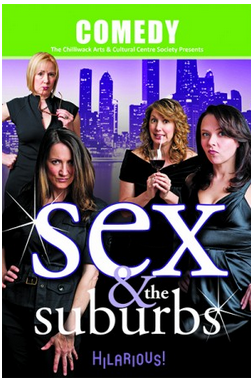 Ladies of the Lower Mainland! You are not going to want to miss this hilarious improv show starring the Ladies of Leave it to Cleavage!

Grab your girlfriends, sip snappy cocktails and laugh your lashes off. Complete improvised – even the Talk Show, featuring special guests from the audience. Which could be YOU!

So very excited to hit the road for three very special ‘Leave it to Cleavage’ dates this November!

These sexually repressed ’50’s housewives aim to instil the virtues of the good ol’ days through hilarious improvised scenes, using audience suggestions and volunteers. Want to know how to make your marriage last? Cook a roast? Keep your neighbour off your lawn? Build a swimming pool with your bare hands? There’s no problem that can’t be solved with a perky attitude and matching satin party dresses.

Looking for a fun night out with the gals? Come check out Christine, Diana and Ellie from LITC (operating as The Ovarian Sisters for this show) as they headline a special night of all-female comedy at the Port Moody Arts Centre.

We are all super proud of our own Ellie Harvie, who is staring in a new teen sitcom called, ‘Some Assembly Required.’

Produced by Thunderbird Films, this comedy is filmed in front of a live studio audience in Burnaby, BC and airs on YTV starting January 6, 2014

Click HERE to check out the fun article about Ellie, featured in The Westender.

Or click on the video below for a preview of the new comedy. 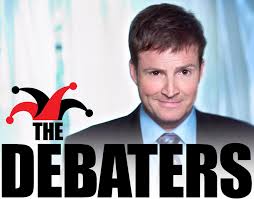 Cleavage’s own Diana Frances was on CBC Radio 1’s The Debaters today where she debated the very hilarious Patrick McKenna about whether or not fireworks are dumb.

If you missed it, click HERE for sample giggle of the episode. We will let you know when it will re-air so you can catch it…or just wait till it comes out on Itunes!

And for fun, here’s a terrible photo of Diana backstage trying to get The Debater’s backdrop in a shot!

Why There Are Fewer Women in Comedy 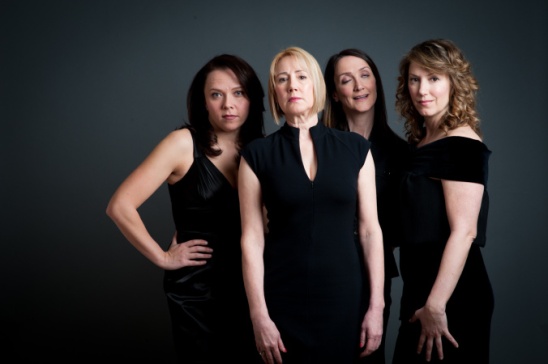 Of course they are! Just look at Ellie’s face in this photo.

Although this question has been asked a lot in the last few years for the sake of sensational headlines (looking at you dead Christopher Hitchens and nearly dead Jerry Lewis,) the Cleavage ladies believe it’s not the question we should be asking.

A far more interesting discussion is WHY there are fewer women in comedy.

Back in 2005, Cleavage co-founder Diana Frances did a radio documentary on this very subject for the CBC Radio 1 show ‘Definitely Not the Opera’. (Ellie Harvie is one of the interviews, so yay for extra Cleavage!)

We’ve had requests to replay the doc so here it is in its entirety.

It’s interesting to note that this aired before Tina Fey, Amy Poehler and Kristin Wiig exploded all over the face of comedy…yet the gals at the end of the doc were calling for this exact need! (Though I’d still love to see Canadian versions of Fey/Poehler/Wiig get as much love and success.)

Oh, one other note – this doc was aired before someone could explain to Diana that ‘self-depreciating’ isn’t a word. Cut her some slack. She was young and frightened of big words.

Give it a listen, ‘like’ and share away! Or leave your comments below. We love a hearty exchange on this subject!

We just joined Linkedin and want to celebrate!

Book a Customized Improv Comedy Show from Leave it to Cleavage before July 15th, and you will save 15%!!!

We know that the fall is a busy time of year for parties, conferences, awards shows and events. So let us take care of your entertainment needs so you can take care of basking in the boss’s praise from a job well done (and 15% saved!)

To book, just fill out our handy contact form HERE

You’ll be so happy, you’ll do the Ellie Harvie happy dance (as indicated in picture.)

Last night we rocked  the nearly sold out Evergreen Cultural Centre with our newly expanded Leave it to Cleavage Show.

Denise Jones was added to the cast as our surly Russian maid ‘Rosa.’ Holy heck it was awesome. Her deadpan rage was the perfect foil to our perky nonsense. Her eyebrows alone are worth the price of admission.

We had a great time riffing endlessly on a guy in the audience named ‘Dick’ and I’m pretty sure we made every feasible combination of dick jokes possible while still keeping our lady-like composure.

Also fun to see our name in lights. Or at least in lights as they would appear after you’ve had a few beers.