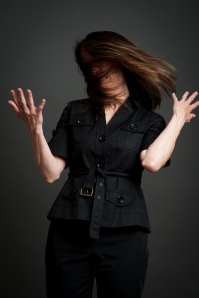 Ellie  is a renowned actress, stand-up comedian, and improviser.

Awards includes 4 Leo nominations with one win for playing Morticia on ‘The New Addams Family’ and 2 Gemini nominations, one for her gold medal performance in CBC Television’s ‘The Improv Olympics’ and one for her dramatic guest star role in ‘Cold Squad.’ She has also been nominated for a Canadian Comedy Award for ‘Best Female Improviser,’ and ‘Best Actress in a Comedy TV Series.’ (Addams Family.)

An alumni of The VancouverTheatreSports league, Ellie has performed at Just For Laughs and with London and Los Angeles TheatreSports.

Ellie was recently seen in the Joss Whedon comedy/horror movie ‘Cabin in the Woods’ and she also played the mom, Catherine Baxter in Home Alone: The Holiday Heist.

As a child she used to iron her money.